The judges were impressed with the excellent production value, good laughs and great acting. The audience also enjoyed the film, there were several laughs and applause at the conclusion. "The United Guys Network," was funded by Telus Storyhive and the full film is available on youtube. We caught up with screenwriter Monty Burt to ask him a few questions about the film and he gave us some great insights. 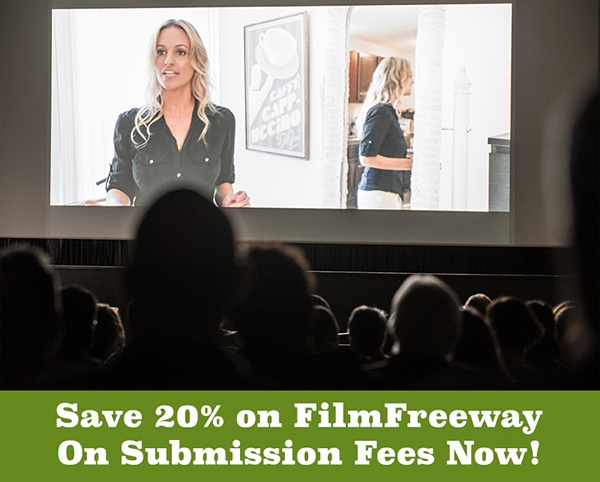 "Loving newlywed husband Paul Seger is making the other guys in the neighborhood look bad. Time for The United Guys Network to step in and
teach him how to be a 'real' husband." The film was directed by Tabatha Golat, a producer, writer, director, editor (and wearer of many hats). Tabatha is an award-winning filmmaker for her short film 'Ten Thousand Steps.' She has written and directed a feature and two shorts, as well as several music videos and corporate videos.

Q1: Why did you think that your film was a good fit for the Austin Comedy Short FF?

A1: My wife and I traveled to Texas a few years ago and found everyone had a great sense of humor. I thought the film would find an audience there. Plus, we would have more chance of getting selected at a shorts festival than a regular festival that has very few slots open to shorts.

Q2: What inspired you and your team to make this film?A2: My director, Tabatha Golat, has a great sense of humor and she and I agreed my script would be a fun one to make. (It's based on a true story!) We met in a class and I liked her previous film, "Ten Thousand Steps" and she liked my script. We agreed to team up and try to make it happen.

Q3: What made the actors interested in being a part of your film?

A3: We couldn't offer a lot of money but the actors said they wanted to be part of the project because of the strength of the script and Tabatha's direction on her previous film.

Q4: How were you able to get the locations for your film?

A4: We shot the kidnapping scene on the street with no permits, only two blocks from the central police station. The interiors at the couple's house were shot at Tabatha's place. The abandoned office floor was provided by connections through friends of Tabatha. It was formerly the home of a software company that quickly outgrew their space and moved elsewhere.

Q5: Can you talk about your sources of funding and favors that you received to complete this film?

A5: We received most of our funding from Telus StoryHive plus I kicked in more money for a contingency fund and later for festival admission fees. We did get beer for free from Parallel 49, a local brew pub but, unfortunately, we had to use near-beer for shooting. We held casting at a meeting room provided by the Fairmont Hotel where the director's husband works. Most of the cast worked for little money but we created a great atmosphere on set and everyone pitched in.

Q6: Has creating this short film helped the careers of the people involved in any way?

A6: The actors now have more material on their demo reels which makes it easier to get work on TV and film projects shot in Vancouver. For me and Tabatha, it has helped open doors when we approach funding agencies. They seem more comfortable dealing with people who already have something in the can. The film played in a comedy festival in Hollywood and a rep from ShortsTV was impressed enough to offer us a distribution deal.

Q7: What were some of the challenges that you encountered while making this film?

A7: One of the biggest challenges was finding the right lead actor. We had filled all the other roles in a open casting session but we didn't find the right person to play Paul. It was finally around Christmas and we asked around town for recommendations, and the same fellow's name kept coming up. Georgie auditioned and he was fabulous! A few days before shooting, our sound man was injured and we had to find a replacement for him at the last minute. That was very stressful!

Q8: How do you and your team use social media to promote your film?

A8: We set up our own Facebook page, we post on festivals we've been invited to (including a trailer and thank you video we produced), and we post on local indie film sites. Also, since we have a blues song on our soundtrack, "Whiskey Bottle," we posted notices on various blues sites, bragging up Harpdog Brown which attracted crossover interest for our film.

Q9: Can you tell us about a time when something really funny happened on set, that didn't get caught on camera?

A9: We tried to create a fun atmosphere on set so I think the best material went on camera. Having said that, to slow down traffic while we shot on a busy street, I pretended to be a homeless person who kept dropping a case full of papers. On day three, we needed to get a low shot in the abandoned office and we all laid on the floor so the DOP could get the angle he wanted. Two of the lead actors had a running Columbo schtick going that only they seemed to understand but it helped build a rapport between them. Lastly, the guys had to drink near-beer and no matter what brand we bought, it was all terrible! They were so happy to break for the day and have real beer!

Q10: Can you list any awards, nominations or official selections for this film?